Houston Texans in need of a plan of action

Okay, you know what?  Okay.  If the Houston Texans are determined to continue this farce of a “Quarterback” experiment I feel it’s time to sure up some of the other holes that’s sinking it.  Here’s what I’m thinking just based off current sports news, my own analysis, and the Houston Texans continual belief that they don’t need to draft a Quarterback. 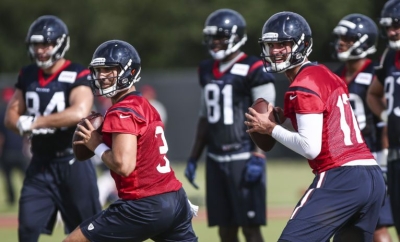 Move 2nd string QB Tom Savage to starter.  Just do it.  Have the other guy (Brock Osweiler) come off the bench.  I know you gave Osweiler a bunch of money, but bite the bullet.  Houston you gambled and crapped out.  If Savage isn’t up for new contract talks you pretty much break even.

Why: Tom Savage is in the system already.  He’s got the experience.  He can be mobile.  His down field vision is superior and can hit the deep ball.

*UPDATE: Texans trade Brock Osweiler to the Browns.  Word of advice.  DO NOT SIGN TONY ROMO!

Why: The best way to improve your passing game is to have an effective running game.  RB’s and O-lineman take a lot of damage, so the demand on them to perform at a high level is important.  That importance can be overshadowed by the demand on QB performance, but it’s a team sport that requires a full team.  You draft a young RB he grows with the system and if he’s already a phenom you have just cemented your future run game.  The NCAA has 1000 of prospects that I don’t keep up with so find the good one.  Buy your vet O-lineman who will pick up the system faster than a rookie.  You get a solid o-line you have a better chance of a healthy QB (pass game) and RB (run game).  The O-line is the foundation of the offense. That’s it.

*UPDATE: Third option QB and RB in the draft and buy or trade for O-lineman.

Sign Adrian Peterson.  I’m stressing this only on one condition.  Do not build around AP, but with AP.  Keep it cheap.  Peterson deserves okay money (whatever that is).  Plus he lives in Houston!

Why: Adrian Peterson garners respect from every defensive coordinator in the NFL.  Give him a phenomenal rookie to teach as he heads in to the setting sun and he just might run for a ring for you.  Last time he came back from an injury he was the NFL leading rusher.  There’s your heart and leadership.  Let him teach.

Honorable mention: Jamaal Charles.  He’s good, but he may be expensive. 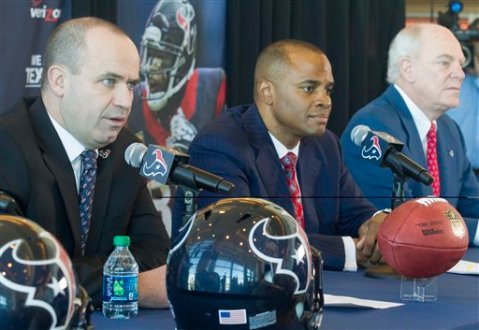 And this is a dead horse but somebody gotta go.  Either Rick Smith or Bill O’Brien or both.  Something isn’t working in that relationship and neither is willing to do anything to fix it.

So that’s my opinion.  I’m looking to see what the Houston Texans do from here.