The smell of fresh cut grass, the smell of the rain off in the distance as you feel a cool breeze ….wait wait, I’m sorry, this is Houston. Here it’s been roughly 100 degrees all summer and I love it because it’s football season. Football is finally here and the hyped rumors of greatness are upon us once again.

HOUSTON TEXANS!!!!! Firstly; to look forward you have to know what’s behind you ( metaphorically speaking of course ) so let me open an old wound just a little to see how not to make the same mistake. The 2016 season was promising and I did see the dream that was imaged, but football just isn’t football without crushed hopes. Crushed hopes, bad decisions, and injuries all are major factors towards ” getting that ring ” and being named the best. Hey, I saw it. A top 10 receiver matched with a speedy rookie. A fresh off the private jet young quarterback. The best defensive end in football on one side and a hell of a dominant force on the other. (This defensive juggernaut of a plan was set in motion since 2014 but injuries kept Clowney sidelined. ) That along with having the number one defense is what a rising team needs. Now let’s Fast forward. Houston ended in the playoffs but, not like they wanted I imagined. That fresh quarterback wasn’t the answer so they got another jet and sent him packing. Will Fuller wasn’t bad but wasn’t great and JJ Watt unfortunately had an early season ending injury. Nonetheless, the Texans still went to the playoffs. That’s why this year seems a little sweeter. The Texans started remodeling by trading up to draft quarterback Deshaun Watson.

The Texans haven’t drafted a quarterback in an early round since the franchise started. In the last 15 years 13 of the quarterbacks that won the super bowl were drafted by that team. The other two? Drew Brees and Peyton Manning. So if you’re not getting a future hall of fame quarterback as a free agent don’t do it. Bottom line is maybe not at the start of this season but soon to come Watson is your guy. From now on, win or lose, Watson is the quarterback for the Texans for years to come. 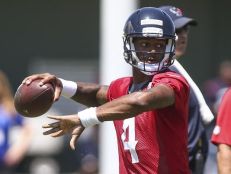 Now unfortunately Will Fuller did just recently break his collarbone and will be out probably the entire season but honestly, all Watson needs is Hopkins and a good tight end. On the bright side, Jadeveon Clowney did play his first full season and showed why he was the first overall pick. Clowney was a pleasant surprise putting doubters and the echos of a ” bust ” to rest. With Clowney and Watt will finally being on the field at the same time

and a top five defense should get the rookie out of a few holes. I’m guessing a 10-11 win season and of course a trip to the playoffs again but as always it’s up to the play at quarterback to decide how far they go this year. So like the start of every season only time will tell.

please leaves comments below and I’m out.

One thought on “For a Texan fan: Dawn of a new season”